Ian quickly went down the rabbit-hole to research which truck would best fit our needs as well as our budget.

After a quick search, we knew right away we did not have the budget for or desire to spend what it would cost to purchase a brand new pick-up truck.

You see, we wanted to be able to pay off the truck and RV within a shortly after purchasing them. In order to do that, we needed to purchase a truck at a much lower price point at around $25,000 or less all-in.

Since we knew we’d be buying a fifth wheel, we had to buy a truck capable of pulling such a beast. As you may well know a brand new truck that would fit that bill would cost a pretty penny.

We found that even those just a few years old were well outside of our price range. This led us to discover that could comfortably afford a truck that was between 10-20 years old.

While we found a few trucks in our price range that were around 10 years old, these trucks had high mileage. Meaning that they might not have much life left.

Diesel engines are perform well at higher mile rates than gas engines. So, we decided that a diesel truck would make the most sense for our needs. Our price point and mileage preferences led us to trucks that were about 15-20 years old. We found the prices were about the same across the manufacturers. Just like they are for brand new trucks.

Next, Ian decided to research Ford, Dodge, GMC, GM and Nissans as they produce quality trucks. First, we reviewed engines and looked at which ones to steer away from.

We only considered Nissans briefly. Their Titans 5.0 Cummins had only been around a short time. Due to the relatively young age of this model, we feared they may be discontinued later or have unforeseen issues. Ultimately, they were also outside of our price range.

GMCs, while a high quality truck, were outside of our preferred price range. Subsequently, GMCs were removed from the running. That left the final four manufacturers on our list: Ford, Dodge, and GM.

Dodge stayed on our “maybe” list because the Dodge 5.9L 24 valve Cummins was the engine used for every model year we were considering. Consistency is king!

In the GM department things got a little more complicated. Their Duramax engine went through four iterations within the same time period. While there weren’t any major red flags with the Duramax itself, the most reliable engine was only produced for two years. Making it more difficult to find one used, and likely that much harder to find parts for repairs as well.

At this point, a Duramax was not out of the running, but at this point we were leaning towards a Dodge tow vehicle.

The final tow vehicle contender was Ford. While researching Powerstrokes, Ian came across Powerstrokehelp. Powerstrokehlep is a YouTube channel with a lot of useful information about Powerstroke engines. This channel really helped to narrow down Ian’s search.

Powerstroke had three engine iterations that we initially considered purchasing: the 7.3L, the 6.0L, and the 6.4L engine.

We quickly eliminated the 6.4L engine as Ian discovered that the 6.4L engine is prone to fail. Once that happens, it becomes nearly unsalvageable. Given that we needed a tow vehicle for full-time travel, purchasing a truck with an engine that was prone to fail seemed too risky for us. So we began researching the other Ford engines.

The 6.0L engine produced from the year 2003 to mid-2004 has a bad reputation. If you are considering a vehicle with this engine from that time period, check the date and serial number against a list of engines to stay away from. However, from late 2004 to 2007, 6.0L’s can be a good deal if you are willing to put in work to address some of the points where the engine fails. Ian recommends checking out Powerstrokehelp.com for more information on “bulletproofing.” However, it was not something we wanted to deal with.

This left us with the Ford Powerstroke 7.3L engine. These engines were produced briefly. From up until 2003 and again from late 2004-2007. They were produced before stricter emissions requirements were in place. This meant they would easier and less expensive to work on. Additionally, their gas mileage is pretty high relative to other vehicles in its class. As such, we found out that they are more desirable and therefore harder to come by.

After this research, Ian decided to look into Dodges and Fords a little bit further before we began our search for the right tow vehicle to tow a fifth wheel in our price range.

Once Ian started researching transmissions, Ford began to stand out above Dodge. Dodge is known for having great engines (Cummins) during the years we were considering. However, their transmissions were seriously lacking during that same time period.

Given that it would require at a significant amount of money to install an aftermarket transmission in order to feel confident driving down the road, Dodges quickly fell off of our “maybe” list. Additionally, 15-20 year-old Dodges are more prone to rust compared to Ford.

Overall, GM transmissions were nothing to write home about. While Ford’s were known to have reliable ones. Ultimately leaving us to make our final decision.

Ultimately, the functionality and reliability of the truck we ended up purchasing was most the important factor to us.

GM was a strong contender. However, when we compared both the Ford and GM trucks, we preferred the look and historical reliability of the Ford trucks. So, it was on to find a Ford F350 7.3L Powerstroke.

After reviewing some videos on Thoroughbred Diesel’s and Stephen Cox’s YouTube channels (which have information on what to lookout for when buying a used 7.3L Powerstroke), the search to find one of our own was on!

We searched high and low all across the USA. Using CarFax’s app and website, we were able to find trucks that fit our criteria and to compare prices.

Every truck we came across had already been sold or sold before we were able to test drive it. It took us calling around to various dealers for about a month or so before we found a truck to go see in person.

Failing to Buy that Truck

We thought this was it. After weeks of searching we finally found a truck that met our basic needs and was available. Unfortunately, it was about a 4.5 hour drive from home.

We packed up the kids and went on a little road trip. We took the truck for a test drive. It was a 2005 Ford Amarillo edition with a 2005 6.0L engine. Nice and yellow. We were tentatively going to name the truck and RV Sonny and Cher – as a play on words. But alas, it was not meant to be.

The dealership had not disclosed that the exhaust gas recirculation had been deleted. We didn’t find out until well after we arrived. Once we found this out, we decided to walk away rather than try to get that repaired, knowing it wouldn’t pass emissions or inspections in our home state.

It was hard to not feel like this trip had been a complete waste of time and fuel. The kiddos were also sad we wouldn’t be driving home in our yellow truck.

Did we Finally Find a Truck

We kept up the search. More determined than ever to find the perfect truck for our family.

It was about one week later that we came across a black 2002 7.3L F350 DRW that was only a little more than an hour away from us. It had already passed our state’s inspection and was ready to go!

At the next possible opportunity, we hopped in our car and drove down to check it out. We made sure we could start it cold and check for a blow-by.

Everything checked out! So, we traded in our 2012 Toyota Camry and a couple of hours later we drove home in our new-to-us truck. Finding ourselves that much further along on our journey preparing to live in a fifth wheel full-time.

Now the search to find our perfect first camper and those RV essentials began.

Share with us below!
Are you currently shopping for a tow vehicle?
If you already own one, how’d you decide to purchase that one? What will you look for in your next tow vehicle?

Welcome to Our RV Blog! 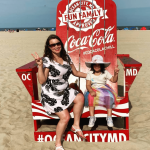 We are Melanie & Ian, and along with our two kids, we created Dreams Built In. Beginning in August of 2021 our family of four (plus our cat Bear) started traveling fulltime in our RV.

Come follow along as we share the RV Tips & Trips for RV Newbies and Beginners that we've learned during our time on the road.

We'll also be sharing the latest and greatest for all RVers out there!

Thanks for stopping by!

Ways to Camp in Your RV

Affiliate Disclosure: Links on our website may be affiliate links. This means we earn a commission, at no additional cost to you, if you make a purchase through one of those links. Read our Affiliate Disclaimer for more information.